7 important points when you sourcing a suitable antenna

At first, let’s briefly explain, what IOT antenna is.

As an important part of the wireless system, the antenna will affect the indicators. When choosing an antenna, we’d must pay more attention to its performance . There are two aspects.

The first is the type of antenna.

The antenna selection meeting the requirements would be donewhen designing. According to different standards, antennas has 4 types.

Like ceramic antenna, with small footprint, high integration. When changing, it’s very easy, suitable for products with small space requirements. But this type of antenna is more expensive and has a smaller bandwidth.

FPC antenna work together with coaxial cable, free to install, with high gain. It can usually be attached to the non-metallic case of the machine with adhesive. If products request high performance requirements and enough space, FPC antenna would be the good choice.

The second is the choosing the electrical performance of the antenna.

There are many antenna suppliers, factories, distributor, agent, wholesaler, ore on-line shop, with different quality, different cost. No matter you are sourcing or buyer, when sourcing an antenna, if the electrical performance work well is very important. Even it effect the functional realization of the entire product system.But antenna has many kinds of parameter. As a sourcing or buyer, if we can understand all of them, it’s perfect. But in fact, sometimes, we cannot know all technology well.

Then, how to select a suitable antenna?

Now, let’s take the LTE antenna as an example, to introduce 7 important parameters when sourcing.

Gain is one of the most important indicators in the antenna. It is the product of the direction coefficient and efficiency. It is the performance of the antenna radiation or the size of the received wave. The choice of Gain depends on the system design requirements for the area covered by the radio wave. Say in brief, under the same conditions, the higher Gain, the farther the distance wave travels. Rougly, base station antenna uses high gain antenna, and mobile stataion uses low gain antenna. Common units is dBi

dBi is the amount of focus applied by an antenna with respect to an “Isotropic Radiator” (a dispersion pattern that radiates the energy equally in directions onto an imaginary sphere surrounding a point source). Thus an antenna with 2.1 dBi of gain focuses the energy so that some areas on an imaginary sphere surrounding the antenna will have 2.1 dB more signal strength than the strength of the strongest spot on the sphere around an Isotropic radiator.

The base station antenna has a Gain range from 0dBi to more than 20dBi.

When the outdoor antenna adopts an omnidirectional antenna, the gain is mostly 9-12dBi,

When the directional antenna is used, the gain is mostly 15-20dBi.

In a populated road, the antenna with a relatively narrow horzontal beam is used, and the gain is generally 20dBi.

Which Gain value is used depends on the design. This value must match when sourcing the antenna

The popularity of 4G is amazing, and 4G has become the largest mobile network technology in the world. The different development plans of mobile communication technologies are used around the world.

LTE networks are suitable for a considerable number of frequency bands

The frequency bands selected by different regions are also different. 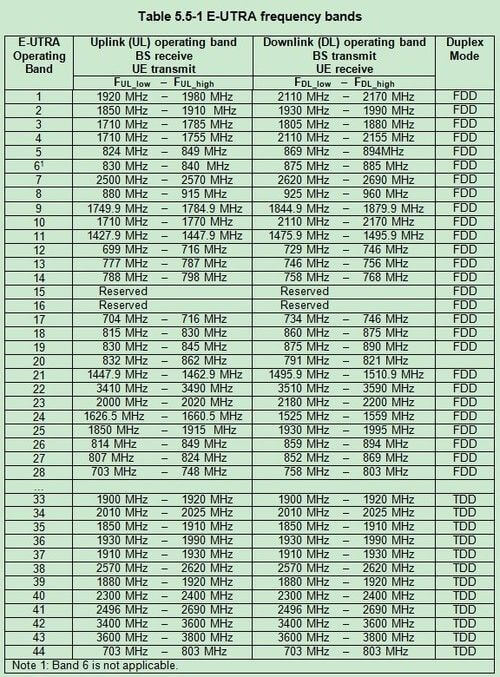 With the closure of 2G networks, the band of LTE has been in continuously updating. See the updated information from Wiki

Then the resistance component is as close as possible to the characteristic impedance of the coaxial cable.

The insulating layer (located between the inner conductor of the cable and the outer conductor). Its an important role in the signal transmission processor.

The material of the insulating layer and the center conductor would determine the characteristic impedance of the cable.

The characteristic impedance of a typical coaxial cable is 50 Ω, which is also the most common.

The characteristic impedance of the video cable is 75Ω

Very few will also use 125Ω

There are two kinds of coaxial cable structures.

One is 4-layer structure, it contains: a core wire, an insulating layer, a braided mesh, and an outer protective layer.

The other is 5-layer structure. It contains: a core wire, an insulating layer, a copper foil, a braided mesh and an outer protective layer. The price of the 4-layer structure will be lower. But the 5-layer structure is low-loss, and the price is higher sure. It’s determined according to actual design.

The core wire acts as a signal conductor in the cable. it’s made by solid copper wire. In large diameter cables, to increasing the mechanical strength, copper clad steel is also used as the core wire.

The insulator is between the core wire and the metal shielding layer. It is necessary to use an insulating medium with low frequency loss, to make a structure like a lotus root. With the supporting action of the insulator, the conductor is concentric with the shielding layer, so we call it coaxial cable.

The preparation network is a shielding layer, which is woven from copper wire. The functions is conductive and shielding. When working, the metal shielding end should connect to the grounded.

The outer protective layer has some kinds of  material: rubber, polyethylene and other materials. It’s wrapped around the shielding layer. The function is protecting and sealed against moisture, corrosion and other functions.

There are mainly three types of connector: SMA, MMCX, and N.

It is suitable for microwave equipment and digital communication systems

In the WLAN systems, we often choose this connector for indoor AP type, AP screens, and AP self-contained antennas.

In WLAN system, we often it for connection of network card and antenna

MMCX connectors has two types, male and female, normally they are in pair.

As well as in ground launch systems.

The N-type joint has two types, female and a male, the cable would use them together.

No.6   The quality of connector

Almost all RF connectors and cables’ impedance is 50 Ω.  For cable TV installations, the impedance is the only exception 75Ω

The use of antennas often work at the outdoors for a long time. The atmosphere contains corrosive components, such as oxygen, humidity, temperature changes and pollutants. Salt spray corrosion is a common and most destructive atmospheric corrosion. Connector is a metal product. The stability will affects the signal transmission quality. So, the moisture resistance, salt spray resistance, and mold resistance of antenna are one of the most important.

Then test the corrosion resistance of products or metal materials. The salt spray test chamber would completed dedicate it.

The standard salt spray test is 48 hours. Although the price will increase and the delivery time will extend, in other word, IOT device’s cost will increase , but it is indispensable for the long-term using of antenna.

There are many performance indicators for antennas. We just list few of them in this article. At the time of design, engineer should have determined most of the performance metrics. So, when you are sourcing a suitable antenna supplier, you could pay special attention at these performances. These performance choices will affect the antenna’s effectiveness, cost, and delivery time.