7 tips to save your time when design monopole PCB antenna

7 tips to save your time when design monopole PCB antenna 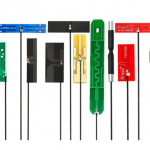 How to design the monopole PCB antenna in the shortest time?

This is a problem for us. Antenna is not the main part in the PCB, but it’s the necessary link for all main parts, lots of communication terminals integrate it. Normally we take much time on it, but get much depressed response.

Another, in the application of the antenna, some irrelevant usage will lead to serious problems. In order to avoid unnecessary mistakes, this document will give customers some design guidelines. So, at the later sections, we will describe some key issues .

Furthermore, we have to consider some simulation and measurement results. They are in the following content.  The antenna sample is tested in ideal environment. But in customer application, the antenna’s performance maybe changed, because the practical environment is different with ideal environment. For the reason that will influence much.

In this application note,  we intend to provide some simple guidelines/rules for using the dual band antenna.  And finally it achieve optimal performances.

It is known that antenna is an important component in the communication system. It works with radiate and receive RF power.
Two major challenges to current antennas in communication systems:
Wideband
Low profile.
Now, let’s take about the reason for wide-band.
It is more and more radio systems. Such as GSM, DCS, PCS, GPS, BT/WLAN, WiMax and UWB. Seems the are very simple, but in fact, they are going to be implemented in a single communication device.
So it is very desirable to have a wide-band antenna. It could cover the above radio frequencies as much as possible. At the second, let’s talk about low-profile.
Yes, we want many wireless communication terminals are thinner and thinner. Thus the antenna’s height has to be shorter and shorter. This indicates not only wide-band but also low-profile would effect the successful.
Typical GSM antennas for communication terminals are PIFA, PILA, and IFA.
These antennas often have a certain height.  A typical height of these antennas is between 5~8 mm. To achieve low-profile, we have to adopt different types of antenna.
The monopole PCB antenna is low-profile, easily integrated, conveniently fabricated. It becomes more and more popular in communication systems.

As we know, it is a ratio of the reflected wave’s power at transmission line following the antenna to the incident wave’s power. The return loss is usually measured by dB, and expected to be less than -10dB in some high quality system.

We know it is the variation of the field intensity of an antenna as an angular function with respect to the axis.

It is the radio of the power radiated to the total power supplied to the radio. In many systems, if more than 40%, the performance is better.

It means for total radiated power. In many systems, we will design it to be more than 28 dBm for GSM900, and more than 25 dBm for DCS1800. For the reason that, the performance Will be better.

This is for total isotropic sensitivity. And in many systems, if normally less than -102 dBm, the performance is better.

3. How to decide the antenna dimension

Here, let us discuss a bent monopole antenna. In order to reduce size, we have to design the the antenna on the PCB plane. Normally it is around 1 mm thick FR4 PCB substrate. Furthermore no metal under the antenna.
The antenna sample size is around 80mm*40mm. Also the sample’s particular dimensions like in Figure 2, The unit is mm. In the sample, we have to consider the corresponded trace. In actual application, seems like in communication system, the antenna’s size should be less than 41mm*36mm, as shown in figure 12. 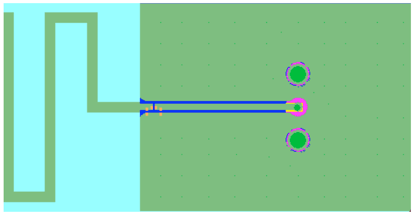 4. How to check the Simulation Results

Ansoft HFSS is a professional tool for the fast and accurate 3D EM simulation of high frequency problems. Often it is special for PCB antenna designing.
The simulation model of the monopole PCB antenna in the coordinate system is shown in figure 3. In the simulation model, antenna size is consistent with the antenna sample, like in figure 2. The PCB substrate material is FR4. It is relative permittivity ε of 4.35 and loss tangent tanδ of 0.014. 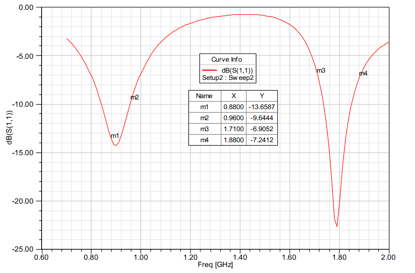 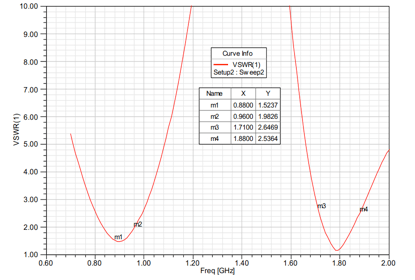 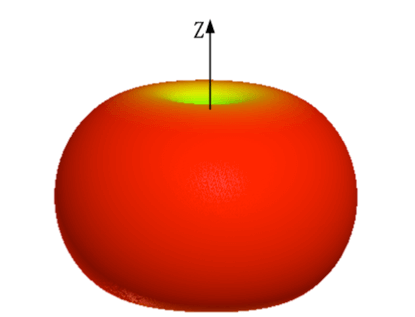 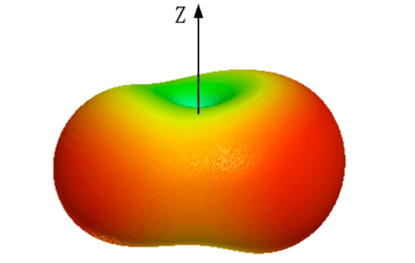 Figure 7  Simulation 3D antenna pattern of 1800MHz
The impedance bandwidth of the antenna (S11 below -6dB level) covers the current radio system of GSM900/DCS1800. Also it indicates how the proposed antenna useful for communication system.

Radiation characteristics of the proposed antenna are almost omnidirectional. The antenna gain of 900MHz and 1800MHz is above -2dBi.

Some measurement results are listed below. For the reason that, the return loss S11 and VSWR is shown in figure 8 and figure 9 respectively. Also, the efficiency and average gain of the antenna is shown in table 1 together. 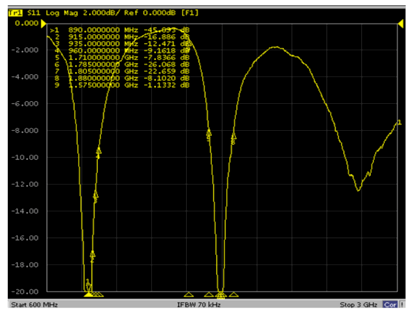 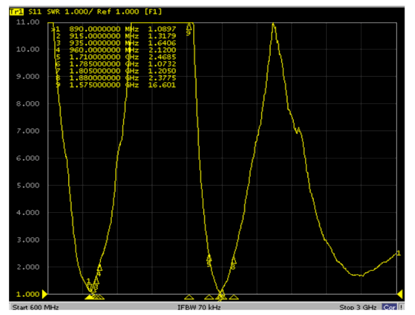 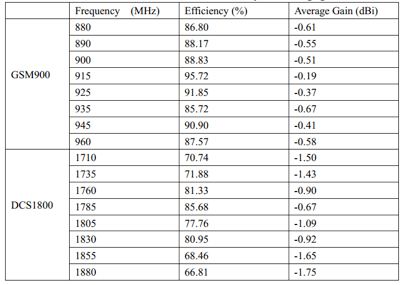 The measurement results of S11 and VSWR is consistent with the simulation ones, as a result the efficiency is nearly all above 70%. The result is very welcome in many applications.

The active characteristic of the PCB antenna is tested in SATIMO system. The 3D antenna patterns of 897.4MHz and 1747.4MHz are shown in figure 10 and figure 11 respectively, and TRP/TIS of some relevant channels, like in table 2. 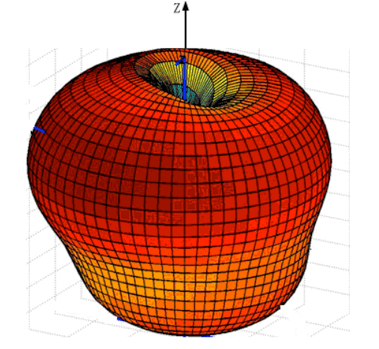 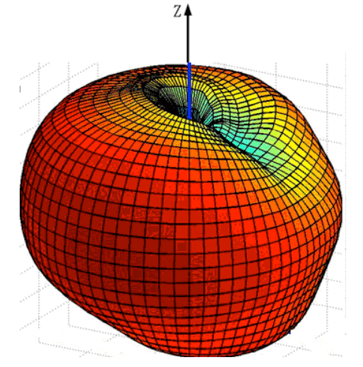 The measurement patterns are similar to the simulation ones, and almost omnidirectional. The TRP of the PCB antenna is above 28 dBm for GSM900 and above 25 dBm for DCS1800. The TIS is below -104 dBm during all the channels.

To achieve optimal performances of the Monopole PCB antenna, some basic regulations information is valuable.

1) The housing of the antenna has to be non-metallic

2) The substrate underneath the antenna must be FR-4 PCB

5) Basic EMC rules must in any case is important to implement a PCB antenna suited for RF.

As for any internal antenna, to avoid shielding electromagnetic wave, the housing has to be non-conductive. Every plastic/dielectric material makes the antenna resonate at lower frequencies. This design should take into account. Hence the antenna tune to slightly higher frequencies in application.

The antenna requires FR4 material (1mm thickness) underneath it to resonate in the GSM900 /DCS1800 frequency bands, so it has to be placed on a free FR4 area without any other metal as shown in figure 1.

Since substrate’s relative permittivity is an important factor in dimensioning an antenna, a typical standard value in electronic manufacturing of the PCB FR4 is recommended, which is 4.35+/-0.05. The loss tangent tanδ of the PCB, which could affect the performance of the antenna, is expected to be less than 0.02.

To avoid unexpected interferences, lay the monopole antenna in the corner of the PCB is more suitable for communication terminal.

Furthermore an inhibit area of not less than 10 mm width has to be preserve beside the antenna to make it work properly, such as in figure 12.

In order not to affect the antenna performance, no conductive part cannot place closer than 10 mm from the antenna contour.

As for any internal antenna, it is also wise to avoid placement of components which is capable to generate radiated spurious/harmonics or to pick up radio frequency interference in the close vicinity of antenna. 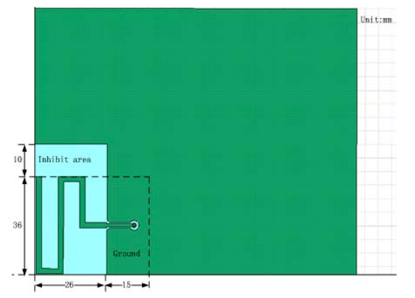 Ground plane is a must in order to have a good EMC behavior. But in this case the ground plane also need as antenna’s electrical counterweight. We suggest to use a ground plane area of at least 15mm*36mm to get optimal performance.

With smaller ground plane extension, the antenna performance maybe reduce. But that depends on application layout.

To achieve optimal performance, any metal (such as ground plane, traces…) cannot adhibit to FR4 PCB. Not only underneath the antenna, but also in the inhibited area.

7.5 The Trace of PCB Antenna

In this scheme, we could adopt the G-CPW trace. Then we could easily transform to any other type of trace.

The size of the G-CPW could account by TXLINE 2003 in figure 13. We determine the the RF trace’s size by the depth and relative permittivity of the PCB substrate.

Since EMI problems are always severe when using an internal antenna. So a good shielding strategy is to have only short trace (which should be less than 10 mm) on the outer layer and route the long traces on the internal layers. As a result it is better to use at least 4 layers of PCB. 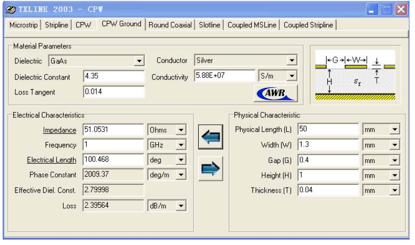 This is advisable to introduce a discrete components matching network on the PCB. So we could cope with potential impedance mismatch produced by application environment.

In figure 14, the trace matches well with the antenna, while only a 0 Ohm resistor mount

In figure 16, more the schematic of the matching network show in it.

Without any further PCB layout change, the implement of matching pi-network is very easy. 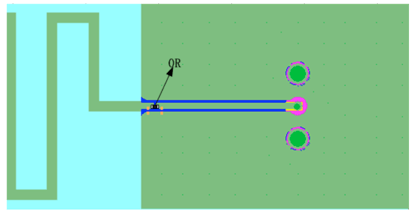 Figure14  Antenna and trace are linked by a0Ohm resistor 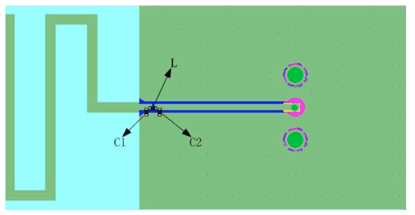 Figure15  Antenna and trace are linked by pi-network

Above all, we know the monopole PCB antenna described in this note is low-profile. It integrate easily, fabricate conveniently. Furthermore appropriate for the current radio system of GSM900/DCS1800. But we also believe that the PCB antenna recommended would provide a great help for the customer application in antenna design.