How to design an antenna for NB-IoT application?

Home/IOT antenna/How to design an antenna for NB-IoT application?
Previous

How to design an antenna for NB-IoT application?

What’s the difference with LTE?

It is a Low Power Wide Area Network (LPWAN) radio technology standard developed by 3GPP to enable a wide range of cellular devices and services. The specification was frozen in 3GPP Release 13. (LTE Advanced Pro). Other 3GPP IoT technologies include eMTC (enhanced Machine-Type Communication) and EC-GSM-IoT.

In IoT, the Internet of everything has become the future development direction, and the development of data communication technology is getting better and better. The future of IoT will be the world of Internet of everything and wireless solutions. This week, IBM announced a collaboration between its IoT business unit and Ofer and Associates to develop a wireless data transmission technology platform. The two IoT businesses are planning to work together to deliver a range of IoT solutions for the telecommunications industry.

Nb-IoT is a low-rate transmission technology, characterized by the low-frequency band, low power consumption, low cost, and high coverage. These attributes make it a very viable technology for use in industry as well as applications in healthcare. One of the problems with radio technology is radio frequency identification (RFID) for identification of objects and services. Nb-IoT achieves this with low cost and high density (Nb = 5–10 mW/cm2).

More and more industries are joining the IoT network, and NB-iot is gaining a larger area of development.

1. Now, what field are the major market for NB-IoT？

Each module factories began to supply the NB module, for the new smart field. Such as, SIMCOM has issued a series of NB module for the worldwide market. https://www.simcom.com/news_view-14.html

In the new application, the antenna of IoT also has more diverse requirements. Some products are used in harsh environments, such as water meters, geomagnetic products, etc Some products need to be practical in appearance, such as anti-damage in the lock of smart bicycle. Some products should be considered beauty of the exterior design, such as smart bracelets and so on. Therefore, the appearance design requirement of the antenna is gradually changed from external to internal. After the antenna is built in, the volume shrinks and the signal is affected. At the same time, the radiation from the metal frame and internal devices may interfere with the antenna performance.

2. Now Let’s discuss the design the antenna in NB-IoT.

3GPP Rel13 defines NB-IoT profile for 14 different frequency bands, 10 of which are in sub-GHz range, reflecting the need to leverage better coverage performance of low frequency bands. However, the list is growing, with (so far) band 11, 25, 31 and 70 had been added in Rel14 specifications. 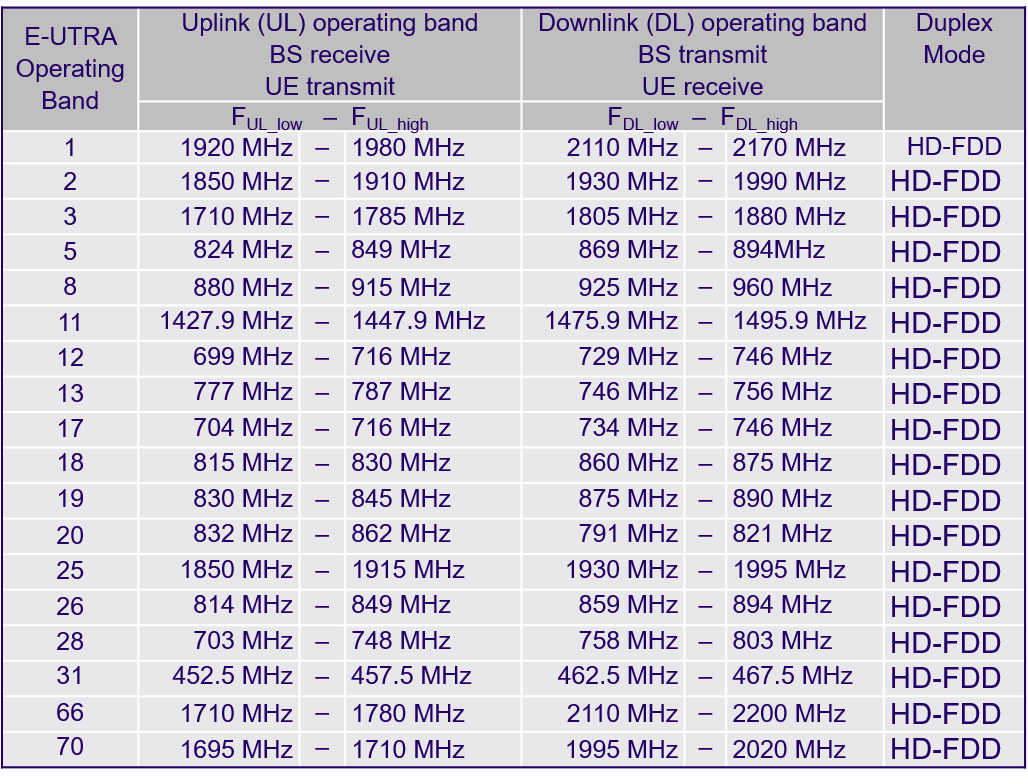 There are many kinds of antenna for NB-IoT. Roughly, it’s almost same as the LTE antenna. But, due to different application field, it has own characters.

It makes communication and data-relay network, and it’s very versatile. There’ll be different types of antennas; here’s a one that we’ll introduce in next part of this article. Here I am going to introduce few of them. 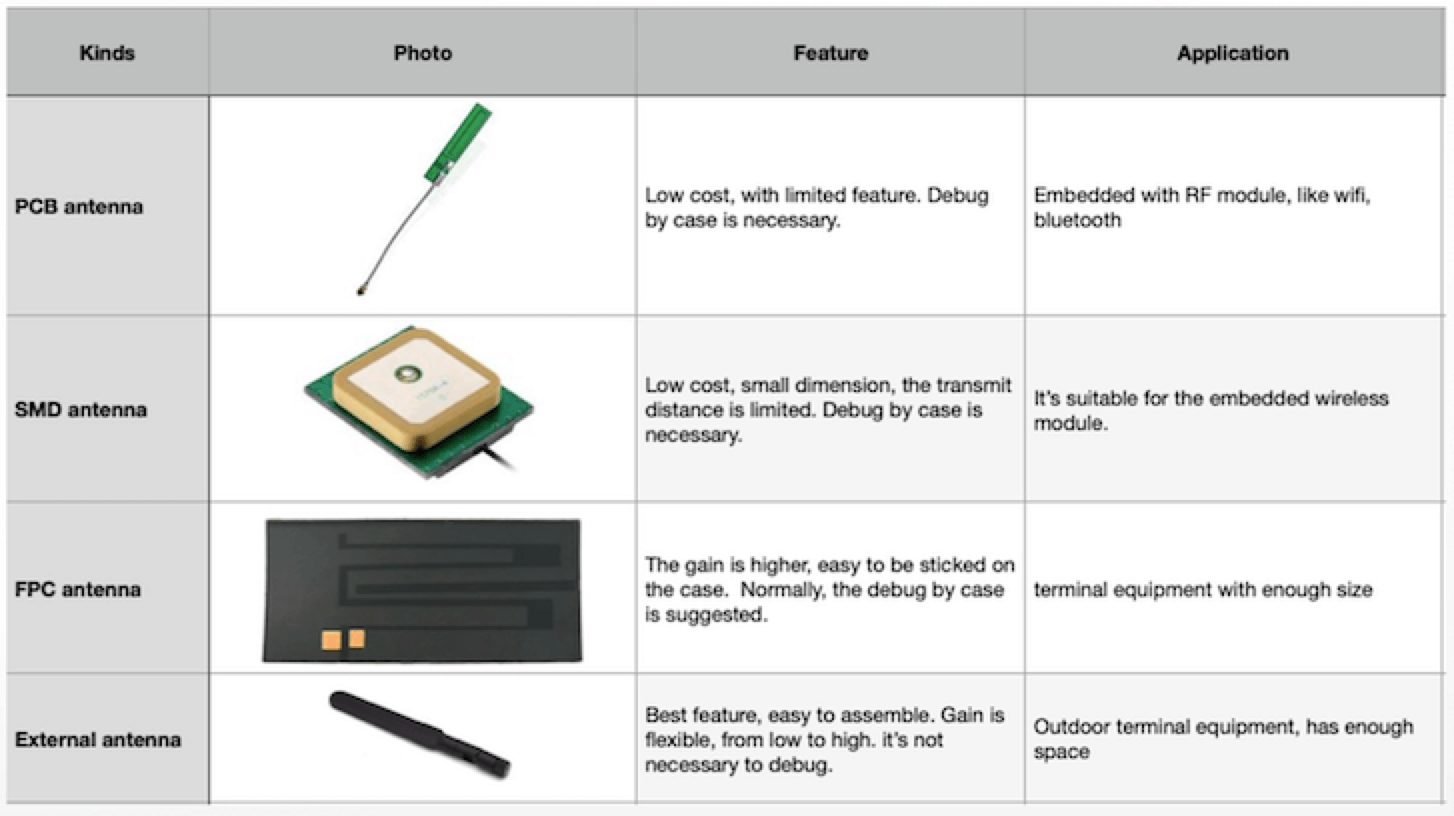 There are other types of antenna for the NB-IoT project, too, such as the spring antenna, LDS antenna.. With the LDS antenna, two or more antennas can beam signals together. But the NB-IoT project has many moving parts, and each component can affect the operation of the entire system. The project’s team is trying to determine how to use the devices without adversely affecting the performance of others in the system. “We know these devices will use up some energy,” Smith admits.

4. The major parameter when choose antenna 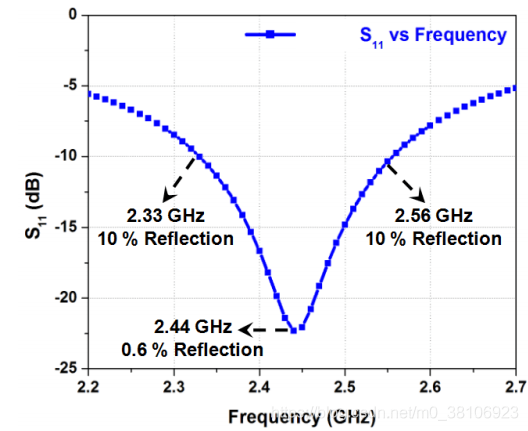 The gain provides information about the radiation in the direction compared to the isotropic antenna, which can be emitted in all directions. The gain unit is “dBi”, which represents the field intensity radiated when compared with an ideal non-directional antenna.

Return loss of the antenna show how antenna with impedance of 50 Ω transmission line (TL) to realize matching, signal feed displays it as the image below. Usually, the impedance value of the TL Ω 50, but also can be other values. For industrial standard, commercial antenna, and it’s the resistance of the test equipment for 50 Ω, so it is best to use the value. 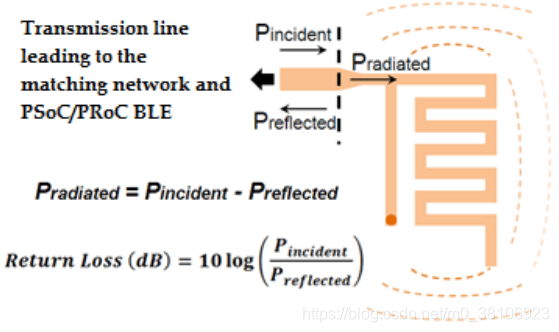 Return loss display: because of not match, the incident power reflected by the antenna (formula is shown below). An ideal antenna would transmit full power without generating any reflection.

The return loss and reflected power of the antenna are shown in the following table:

A portion of the non-reflective power consumption is consumed as heat in the antenna. The heat generated is due to dielectric losses in the FR4 substrate and conductor losses in the copper wire. This information is used as radiation efficiency.

When the radiation efficiency is 100%, all non-reflective power consumption is emitted into space. Minimum heat loss for small PCB profile factors.

The non-directional antenna can be equivalently transmitted in all directions on a plane perpendicular to the axis. But most antennas don’t deliver the desired performance.

For detailed instructions, see the radiation diagram of the PCB antenna shown in the figure below.

Each data point represents RF field strength and can be measured by an indicator (RSSI) in the receiver for receiving signal strength.

As expected, the resulting contour image is not circular because the antenna is not isotropic. 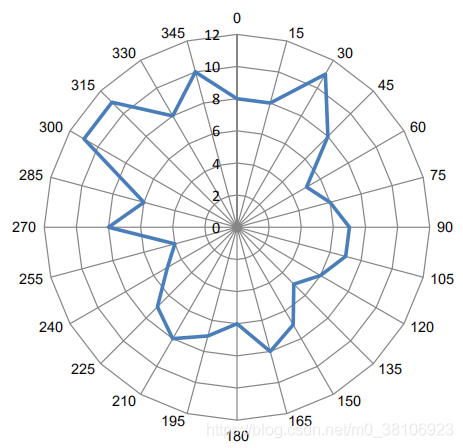 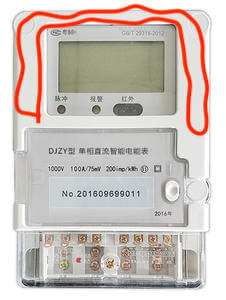 The smart electricity meter has a large volume, with a large space for the antenna. From the perspective of antenna performance, it is suggested to adopt FPC or PCB plus coaxial welding.

As shown in Figure 1, and there are batteries under the surface shell. It is suggested to design the antenna to the top and both sides, with the following precautions:

The antenna assembly method needs to be considered the production line after assebled. As shown in Figure 2, the antenna cannot be designed on the surface shell, which may easily lead to the performance deterioration caused by the too long cable. 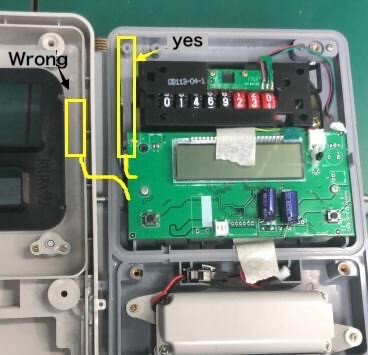 Antenna wiring needs to be extended a suitable length. It is recommended to reserve an area of 800 square Mm, which can conduct with PCB, but not with the metal shell, easily leading to the failure of the product to pass electrostatic measurement. 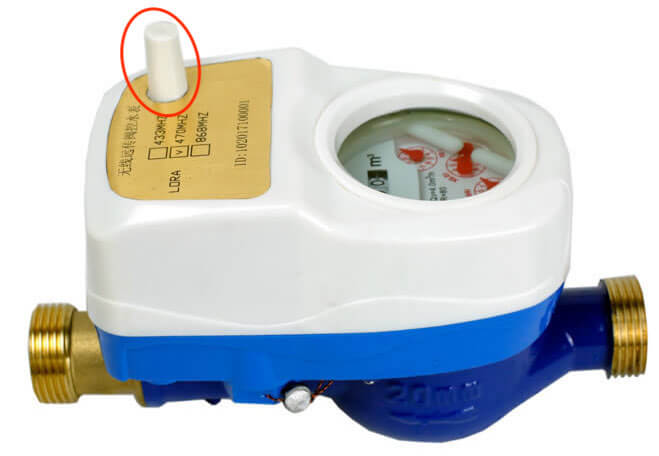 Normally the smart water meter dimension is limited for antenna, and waterproof needs to be considered. Some products need to be treated with glue, and the antenna is usually realized by spring or steel wire welding.

The antenna can be designed as a spring or a flat line-diameter bend. BTW, it should be taken to ensure that the antenna has sufficient space (antenna routing area and clearance or height).

If using the line diameter method, the height or clearance should be more than 6mm, the area is at least about 300 square Mm 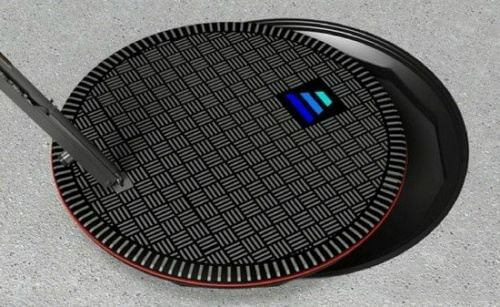 The manhole cover is a large metal surface. It’s the most special point comparing other smart device. So, when design antenna, it necessary to consider the metal surface. When debugging, the application scene should be added a simulated metal plate simulation.

The antenna is suggested PIFA form, which is relatively less affected by the metal panel. The wiring position is suggested as shown in figure. The design is at the bottom position, and the side part can be wired in a small amount. The details are shown in the figure below. 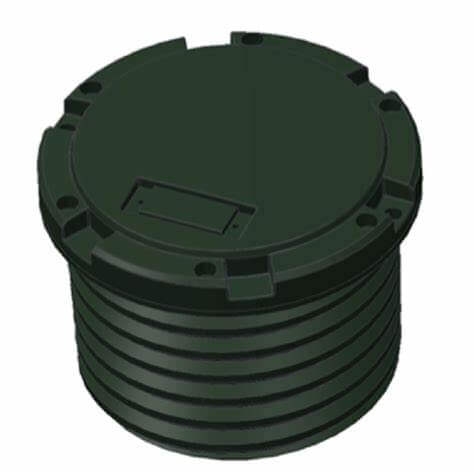 As for the location of geomagnetic products on the ground, the antenna is designed at the top, and antenna square orientation design should consider the antenna radiation direction upward, so as to increase the effective power of the antenna.

5. Notes of the antenna design

When designing the product, the following issues are suggested to be considered:

If the antenna is perpendicular to the main board, and the clearance above 30 X 6mm is required (the distance from the antenna to the metal). 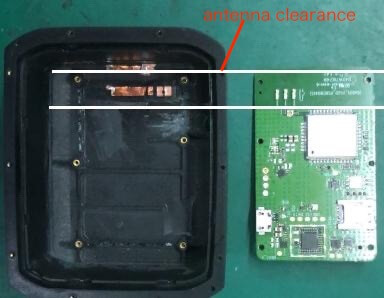 If connected by coaxial cable, the area may need to be doubled.

If the antenna ground and the motherboard ground can achieve ground conduction, the actual required area could be reduced.

Finally, share a file of antenna solution selection from TI: 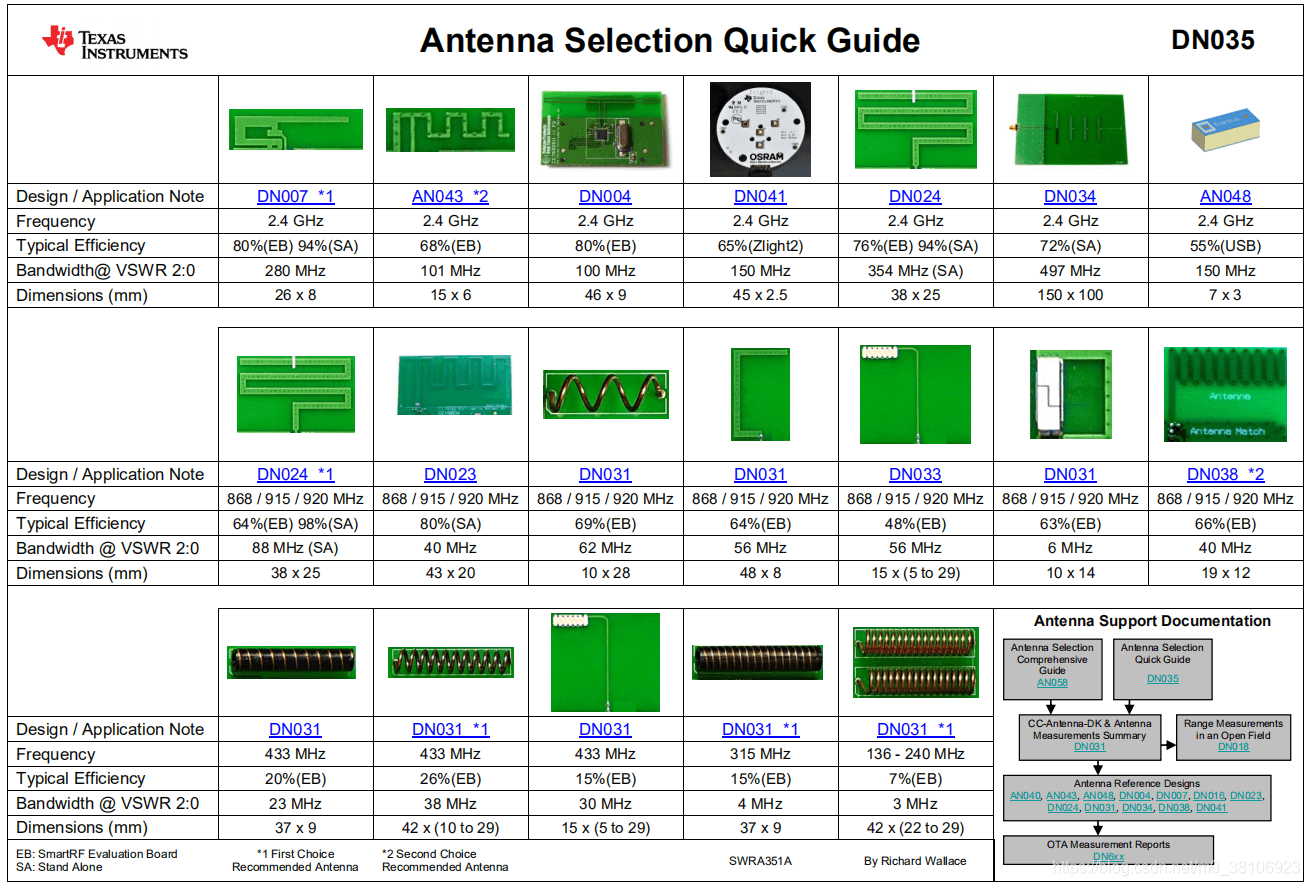